Not So Creepy Crawlers by Faith Cisneros

Consumed by the way each thick hair lay defined, colored like a piece of old dry wood that has begun to fade, I imagined the stiff body revitalizing within moments of focusing on it. I drew in a quick breath of air before I began to untangle what the life of the moth under my microscope must have been like. The white lit background of the microscope quickly faded into the sunny heat and low brush of Apache Box, Arizona, a desert virtually untouched by humans. In my mind’s eye, the moth, as if out of habit, shook its brown jacket to shake the bits of debris that got caught on its wings when we captured it. Then it stretched its spindly legs. I could not help but be both amazed and horrified at how the diameter of its eyes must have been at least ten times its legs. Even if I had bundled all six of its legs together, the diameter would fail to block the eyes’ sight in any significant way. Regardless of the perplexing proportion, the moth stood on its branch and soon began to spread its wings for a flight. With my graceless tweezer skills, I began to move the moth to get a better look at the circles and lines making up the pattern of the wings, but my imagination was too far away from reality; it felt like the moth was darting at me. I gasped and jerked away from the microscope and my tweezer fell with a light clang. I was back in the lab with one unlucky moth. 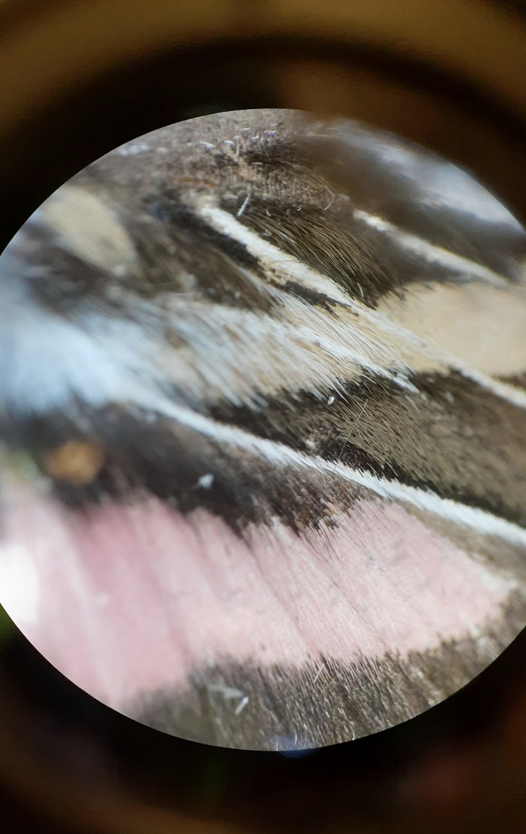 “Ironically, I used to hate bugs.” Dr. Isabelle Vea, a scientist who works closely with scale insects and flies, said this. It felt like a relief when she did. Until she said it, I could not bridge my experiences with bugs before and after entomology week during the JEDI Scholars Program.  Like most people, I used to jump back from and cower at bugs in my house in an adrenaline-fueled flight reaction. In fact, I used to have jolting, heart-racing nightmares of a giant black centipede crawling into my bed. Now, I’m someone who just needs a short comment of encouragement to capture a squirming centipede and keep it in a tube in my breast pocket during the dead of night. When I told my friends, they thought I must be brave or crazy. My experience did not feel brave or crazy though. Dr. Vea made it make sense. She seemed like me: more on the quiet side, open to new experiences but not any more brave or crazy than anyone else, and most importantly, had that mental shift from a hatred to a love of bugs. Thinking about it now, my other JEDI Scholar peers must have felt similarly.

Among the four of us, our approach and reaction to entomology week varied so much at first that it felt like our shared experience was four different ones.

Mary’s reaction was the easiest to read. While the rest of us quietly peered into our microscopes at separate tables, she kept the lab alive with buzzes of excitement about everything ranging from the colors that popped out of wing patterns to how many loose insect legs are scattered across their workspace. She had one moth that she obsessed over more than the other bugs. It had wide vibrant peach red inner wings that contrasted its brown exterior wings. She hoped to give it to her sister to convert her into a moth lover since her sister hates them. While mischief glinted in her eyes when she told us these intentions, her dedication to making the specimen as beautiful as possible proved her desire to pass forward her own new appreciation for insects. First with the antennae and then with the wing of the moth, Mary resurrected her specimen to full posture using nail polish. One day I caught her engaging in this tedious work even during our lunch break. It made me smile to see this. After telling her how good it looked, I turned her attention to the scorpion we had caught in Apache Box. We probably had already had the same conversation about that scorpion three times. Even though I was there, I told her how I still could not believe she was brave enough to coax and trap the venomous bug into her tube. She told me my encouragement helped her do it. I don’t think I contributed much, but in retrospect, her experience with the scorpion mimicked my own with the centipede. She didn’t go to Apache Box feeling like she could capture a scorpion; instead, fascination trumped her fears throughout our time there. Like me, she had a shift in her fear of bugs as well and wanted to share her new perspective through presenting her sister with the moth, though I still have no doubts she is a courageous person for other reasons. 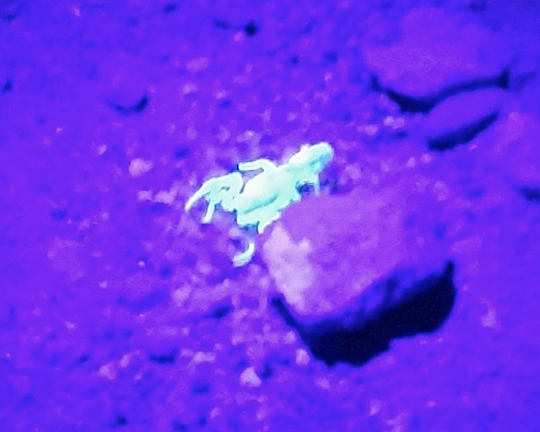 Unlike Mary, Savage, another JEDI scholar, did not seem brave; instead, he seemed without fear at all. His unwavering face had us all fooled. Coleoptera, orthoptera, neuroptera, hymenoptera: these are just a few of the orders of insects that he has identified in his collection with a quiet captivation under his microscope. In fact, I think he got so caught up in his bugs that he didn’t realize that entomology week was the quietest I’ve seen him. He only spoke up to ask questions to the mentors about identifying the stranger bugs and when Marcus, a JEDI Scholar as well, and I asked him to explain how he could identify a beetle from a roach when they’re only a couple millimeters long. While little was said, anyone looking at his collection could tell Savage had a taste for extremes and variety among the insects he caught. So, it surprised me to later hear him say, so nonchalantly, that he was terrified of spiders when his collection of them kept growing. I guess it would be more accurate to say Savage has a great poker face instead of a fearless one.

The only JEDI scholar’s story that might not fit the fearful to fascinated story arch is Marcus’s. On the last day of entomology week, I asked if his thoughts had shifted because of our experience and how so. Within a sentence, I could tell he was in love with nature. Like a gentle giant, the facial muscles that pulled at his lips to smile seemed to pull all the room’s warmth towards him when he answered. All he said was, “Oh man, I’ve always been fascinated by living things,” but the genuine thoughtfulness in his voice could have come from a fantasy character who lived in harmony with the mammals of a forest and let vines grow in their beard. Dramatic, I know. But the more he talked, the more the image made sense. Marcus described how everything from the MV (Mercury-Vapor) light we used to attract bugs to the fifteen minutes we spent talking about ant lion behavior amazed him. He said learning about these things could make us better stewards of the environment. I had not thought about that outcome from our learning, but after hearing about how Marcus made sure he never even squished an ant as a kid, I have no doubt that it must have been on his mind throughout the whole experience. While the protective quality he has for nature might have some thinking he would inherently be against the killing of bugs for preservation, Marcus has found how preservation is protection. The explanation for this is best exemplified in his interest in photography. He’s specifically interested in landscape photography, in fact, so much so that he took a picture of downtown Phoenix at the same place each week. His camera captured the shift from a pulsing metropolitan to a virtually abandoned city from the COVID-19 quarantine to the agitated masses protesting for equality through the Black Lives Matter Movement. Marcus said he can document where things were and where they’re going with his camera. Now, with preservation, he can document the stories of all the organisms he seeks to protect and give conservationists the evidence they need to carry through with their shared goal. I think that is what true love of biocollections looks like. 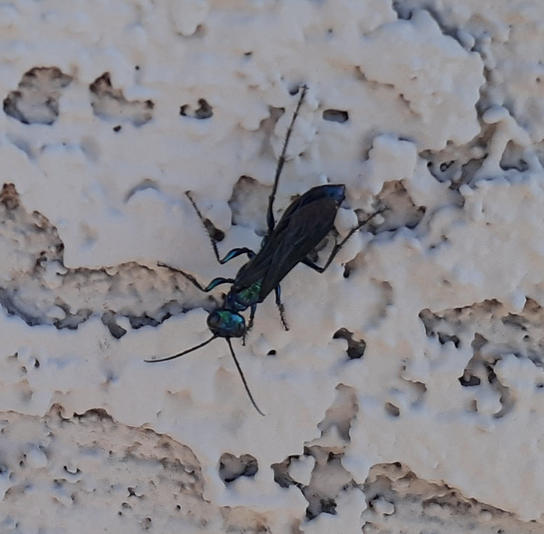 While those of us in the JEDI Scholars cohort might not end up with a career in entomology, I have no doubt our experience will impact how we approach our life paths. Already, I think about the bugs I see outside my apartment and am curious about how they live and if there could be more than I see if humans approached infrastructure differently. However, I also see how niche it is to love bugs, and how many people miss out because of that. After talking to Dr. Sangmi Lee, the collection manager for the ASU Hasbrouck Insect Collection, it was obvious that getting into entomology was a stroke of luck more than anything. She described how it wasn’t until she went on a field trip to catch bugs for a college entomology class that she genuinely noticed and appreciated bugs beyond just fried grasshoppers, a common street food in her childhood home of Korea. She remembers seeing other students catching all the big moths and asked herself, “Why don’t they catch the small ones?” That question led her down a path to where people at the ASU biocollections call her the micro-moth expert. It’s a small spark, but it ignites. I was surprised to hear how our little comments about what we see in the bugs that are cool and interesting sparks new thoughts and questions for Sangmi, too. She said that’s how she learned from us. There are only four of us scholars and only so many handfuls of students taking entomology courses. If everyone took a trip to catch some bugs, I wonder how many new sparks could be ignited and how many fears could be conquered and diminished. I wonder how many conservationists and better stewards of the environment there would be. But, most of all, I wonder about how many people would simply get enchanted by the colors and patterns of a moth’s wings. 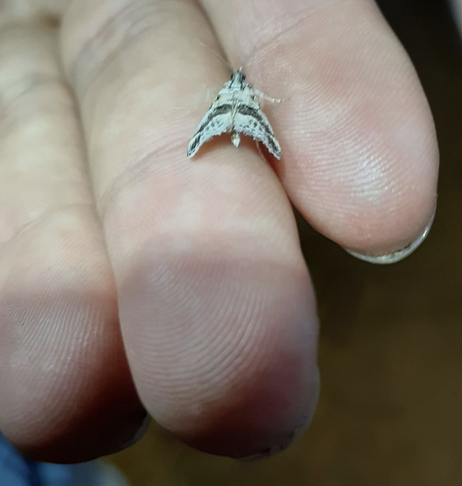