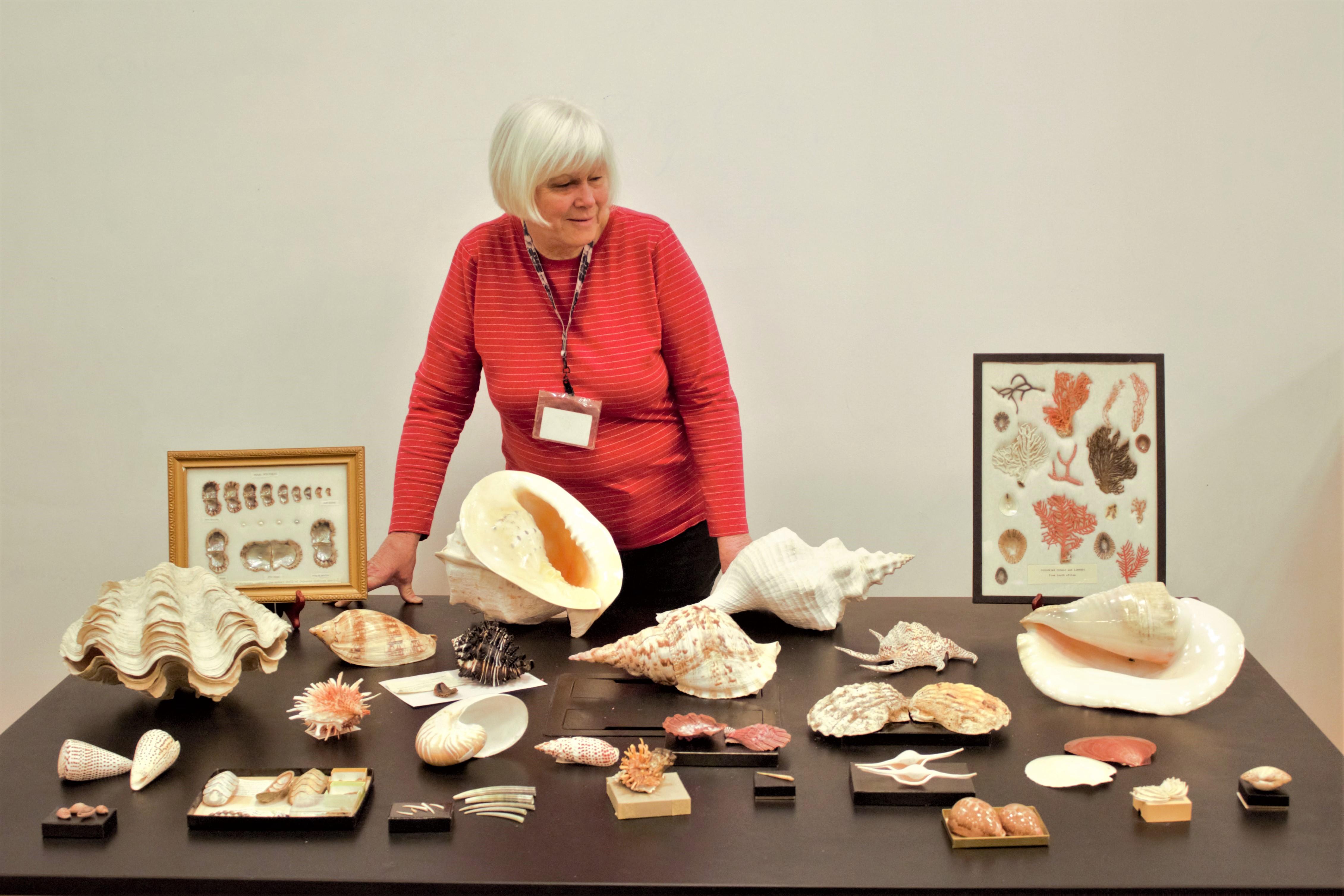 The Mollusk Collection is compiled mainly of gastropods (snails), and bivalves (clams and such), with a few scaphopods, polyplacophorans, and cephalopods (tusk shells, chitons, nautilus, etc., respectively). There are also some members of phylum Echinodermata, such as sea stars and urchins; and some corals from phylum Cnidaria.

Our collection is made up of several smaller shell collections donated by different individuals. The two largest collections make up the vast majority of the whole. The largest is approximately 100,000 shells donated by Edwin C. Roworth around 1970. This collection has been moved several times since its’ delivery to Dr. Pewe, then head of what was the Geology Department (now School of Earth and Space Exploration). As a result, specimens and labels have been separated and work is ongoing to reconcile them and update the taxonomy. The second largest collection is 40,000 shells collected by Chester W. Melville and was received in 1966 two years after his death. This collection also had labels separated from the shells during shipment from Mr. Melville’s home in Massachussetts. However, at that time Phoenix had a shell club and the members were able to reconcile most of the shells. Other collections are much smaller and include fossil shells collected in Florida; and shells collected in Okinawa.

Where are mollusks found?

All classes of mollusks are found in the seas, from the tidal splash zone to deep abyssal plains. They are even found around submarine thermal vents. Bivalves and gastropods also inhabit fresh water lakes and streams, and. gastropods have even moved onto land. They are found on all continents except Antarctica. Land snails live in all environments from arid deserts to wet jungles, in hot to cold climates. They live under rocks, among detritus, and on bushes and trees.

Not only are shells beautiful, but they also provide valuable markers for scientists in other fields. Fossil shells provide clues to the history of the planet. Mollusks are some of the first creatures to inhabit the Earth. They have been almost completely wiped out during several major extinction events. Each time they recover they show signs of evolving to cope with the different environments they inhabit. Their shells survive as fossils giving geologists and paleontologists information about planetary or localized events. They provide archaeologists and anthropologsts information about ancient societies and trade. Their presence or absence are current indicators that show how human activity and climate change are affecting the planet

How can I visit the shell collections?

The collection is housed within the ASU Natural History Collections located at 734 Alameda in Tempe. We are available to the public with advance notice. Dale works on the collections two days a week, Tuesday and Thursday, between 7:00 am and 3:30 pm., and enjoys showing shells and talking to visitors.