Home / Ten Things You Might Not Know About Lichens, But Wish You Did

Lichens occur throughout the world but are easy to overlook because of their small stature.  These miniature plant-like organisms perform many important ecological functions.  The following compilation of lichen factoids will help you impress your friends and could make the difference if you ever appear on a quiz show and the category is lichenology (the study of lichens).

#1.  Lichens are neither fungi nor plants – they are both!  The outer skin and internal structure of a lichen is made of strands of fungal hyphae.  Interspersed among the strands inside the lichen are individual cells of algae.  This kind of interaction between two different organisms is called symbiosis or mutualism.

#2.  The fungus may be getting the better end of the deal .  The fungal partner in the lichen symbiosis provides a home for its algal associate to live that is relatively safe from predators and somewhat climate-controlled (the algae get exposed to sunlight, but are protected from drying out).  Being photosynthetic, the algae provide food for themselves and the fungus.  The algal partner can usually live outside of the lichen in streams, ponds, or wet soil. The fungal partner, however, has become dependent on the algae for its food and cannot live off of decaying organisms like other fungi.  Some scientists think the relationship between lichenized fungi and algae is actually a controlled form of parasitism.

3.  Lichens typically consist of one species of fungus and 1-2 species of algae.  The algal partner may be a species of green algae (Chlorophyta) or a cyanobacterium (Cyanophyta, formerly called  blue-green algae).  Lichens are named for the fungus species rather than the type of algae in the partnership, since the fungus is the more conspicuous member.  Some lichens contain additional microbes and the entire structure might be better considered its own little ecosystem.

4.  There are at least 18,000 species of lichens … but probably lots more!. Taxonomists estimate that between 17-30% of all fungus species are capable of becoming lichens.  With the number of fungi species believed to number over 1.5 million, there may be at least 250,000 lichen species.  Since many fungi look alike superficially, taxonomists have resorted to genetic analysis to differentiate species.  In a 2014 study, what was assumed to be one species of lichen (Dictyonema glabratum) turned out to be 126 genetically distinct “species”.  Based on records from the Consortium of North American Lichen Herbaria website (www.lichenportal.org) the lichen flora of Arizona consists of 969 species, or about 19% of all lichen taxa known in North America.

5.  Lichens are not just gray, drab, crusts. Actually, lichens come in a rich variety of colors, ranging from bright yellow, red, and orange to green, black, brown, silver, and gray.  Many lichens are flat and leaf-like ("foliose").  Lichens growing on bark or the ground sometimes have a central stem with small branches that give them the appearance of a dwarf shrub (“fruticose”).  Some lichens become embedded in the upper surface of a rock or cliff and cannot be removed without breaking off a chunk of their substrate.  These “crustose” lichens are especially resistant to herbivory.  The many colors of lichens help protect them from too much sunlight or low temperatures.  Colors are a byproduct of the complex chemistry of lichen tissues.  Over 700 organic chemical compounds have been isolated from lichens (90% are not known elsewhere in nature).  These compounds help protect the lichen from being eaten.  Chemistry is an important factor in identifying different species of lichens which are otherwise morphologically similar.

6.  Lichens occur in nearly all habitats, from the Arctic to deserts, grasslands, and temperate and tropical forests.  Worldwide, the environments with the greatest diversity of lichens are coastal areas, the canopy of temperate rain forests, and montane tropical cloud forests.  Lichens may be important components of sites that are too extreme for other green plants to grow, such as  wind-blasted mountain cliffs, frigid arctic boulder fields, or baking deserts.  About the only places where lichens are poorly represented are aquatic or marine areas—but some lichens occur on barnacles!  Lichens frequently grow on rocks, but can also be found on bark, leaves, soil, and even other lichens.  Tiny fragments of lichen have been found on the larvae of lacewing insects to help camouflage them and the insects disperse asexual lichen soredia (spore-like bits of lichen and algae) in return.

7.  Some lichens can live for decades or centuries, but grow very slowly.  The exact age of a lichen is difficult to pinpoint, but those that grow on buildings or tombstones can often be dated based on

historical photographs or archives.  Using lichens to age structures is called lichenometry.  In nature, the presence of healthy, mature lichens is an indication that a site is relatively undisturbed.

8.  Lichens derive much of their nutrition from trace chemicals in the atmosphere. Lichens do not have roots or vascular tissue to uptake or transport nutrients from the soil.  Most of their water and chemical nutrients are absorbed from the air.  This makes lichens very sensitive to toxic chemicals and pollution.  Herbarium specimens are invaluable for tracing changes in the range of lichens in the vicinity of polluted areas.  Researchers can also sample lichen tissue to chemically reconstruct atmospheric pollution levels at different times in the past.

9.  What good are lichens?  Besides being valuable bio-indicators of pollution, lichens provide important ecosystem services, such as binding and building soil and fixing atmospheric nitrogen.  Lichens are a major winter food source for caribou (reindeer moss is actually a lichen) and are eaten by flying squirrels, red-backed voles, and a variety of invertebrates.  Many birds use lichens for nest material.

Humans use lichens in many ways too. Various cultures across northern Europe, Asia, and North America consume lichens as food (bread moss is an edible lichen popular in Scandinavia).  Lichens have also been used to flavor bitter beers.  Fruticose lichens, such as Bryoria and Alectoria, have strong fibers used for clothing.  The many colorful chemicals found in lichens are used to dye fabric.  Lichens have many antibiotic properties and have been used since prehistoric times to dress wounds or as tonics or laxatives.  One lichen species has been found to inhibit growth of the HIV virus that causes AIDS.

10.  Lichens are declining in many areas due to pollution and habitat modification.  Urban sprawl and air pollution are the greatest threats to lichen survival in cities and suburban areas across the United States.  The unique lichen flora of California has been especially hard hit by the double whammy of smog and rampant real estate development.  Soil lichens of the Great Basin, Colorado Plateau, and other arid areas of the west have been impacted by trampling from livestock and off-road vehicle recreation.  Rock-climbing, mining, and competition from invasive weeds have been implicated in lichen declines in some areas.  Fortunately, lichens are hardy and recover if  given half a chance. 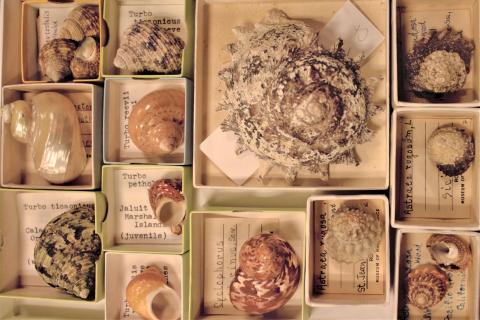 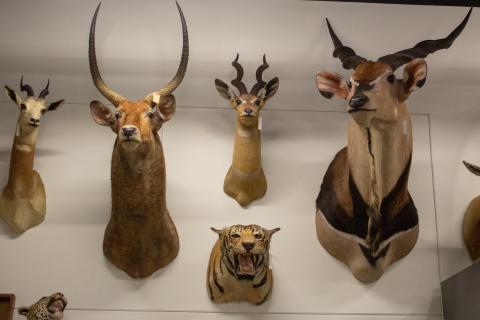 The Mammalogy Collection (ASUMAC) contains approximately 9,300 specimens representing more than 160 species, with a geographic concentration in the southwestern United States and northwestern Mexico. The research collection represents the second-largest mammal collection in Arizona. 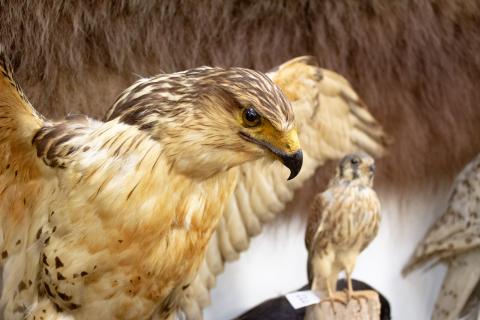 The Ornithology Collection (ASUORC) at the ASU Natural History Collections contains approximately 2,000 specimens representing more than 300 species, with a geographic concentration in the southwestern United States and northwestern Mexico, with some Neotropical representation as well. 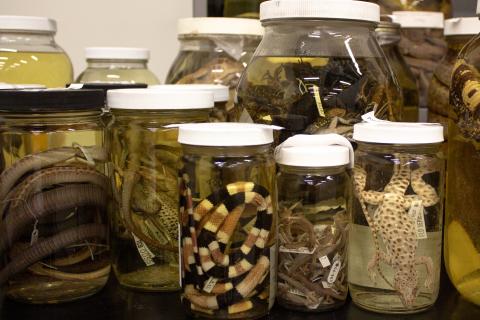 The Herpetology Collection (ASUHEC) contains approximately 38,000 specimens representing more than 900 species, with a geographic concentration in the western United States and northwestern Mexico. 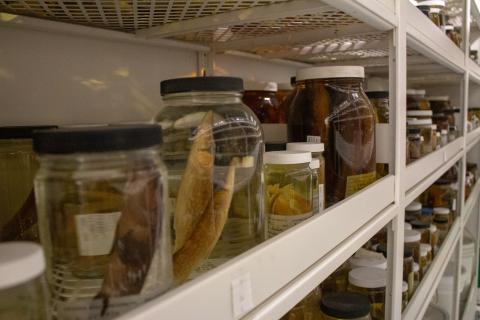 The Ichthyology Collection (ASUFIC) contains approximately 22,000 lots representing more than 580 species, with a geographic concentration in the southwestern United States and northwestern Mexico. 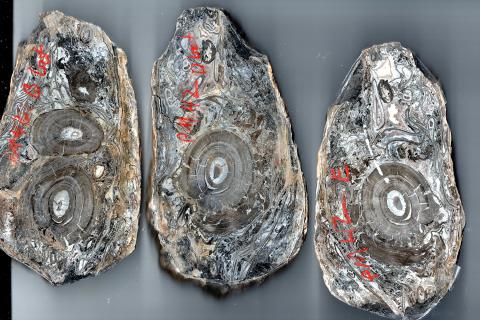 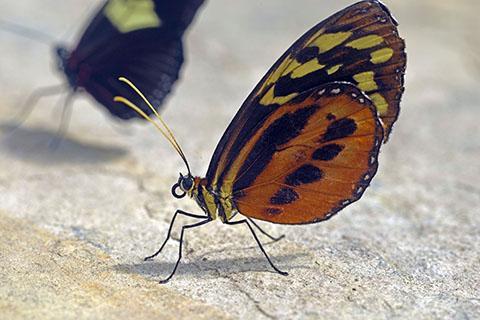 The Hasbrouck Insect Collection (ASUHIC) is a vibrant part of the ASU Natural History Collections community, with a diverse array of insect research, learning, and outreach activities. 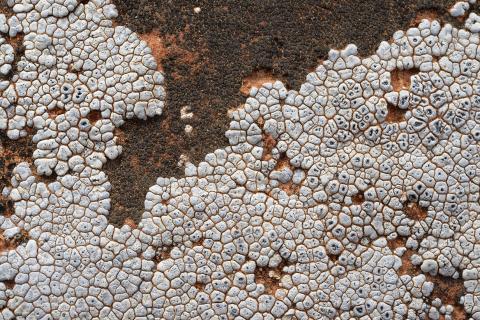 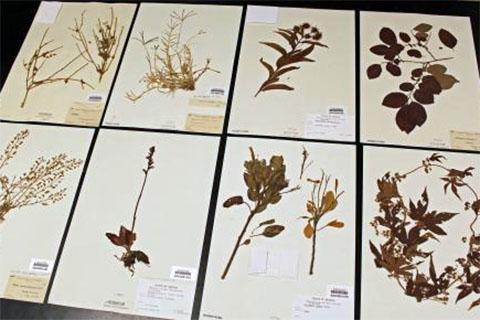