Lichens are comprised of a fungus species and one or more species of green or blue-green algae, forming a symbiotic partnership.  Fungal hyphae form the outer shell of the lichen and most of its internal structure, with algal cells interspersed among the hyphae.  The fungus provides protection for the algae (especially in harsh, dry environments), while the algal partner produces food from photosynthesis. Taxonomists have named over 18,000 species of lichens (based on the fungal partner), but there may be as many as 250,000 species worldwide.  Lichens are important ecologically for fixing atmospheric nitrogen and binding soil.  They are also valuable to humans as sources of food, dyes, and drugs and as sensitive bio-indicators of pollution. 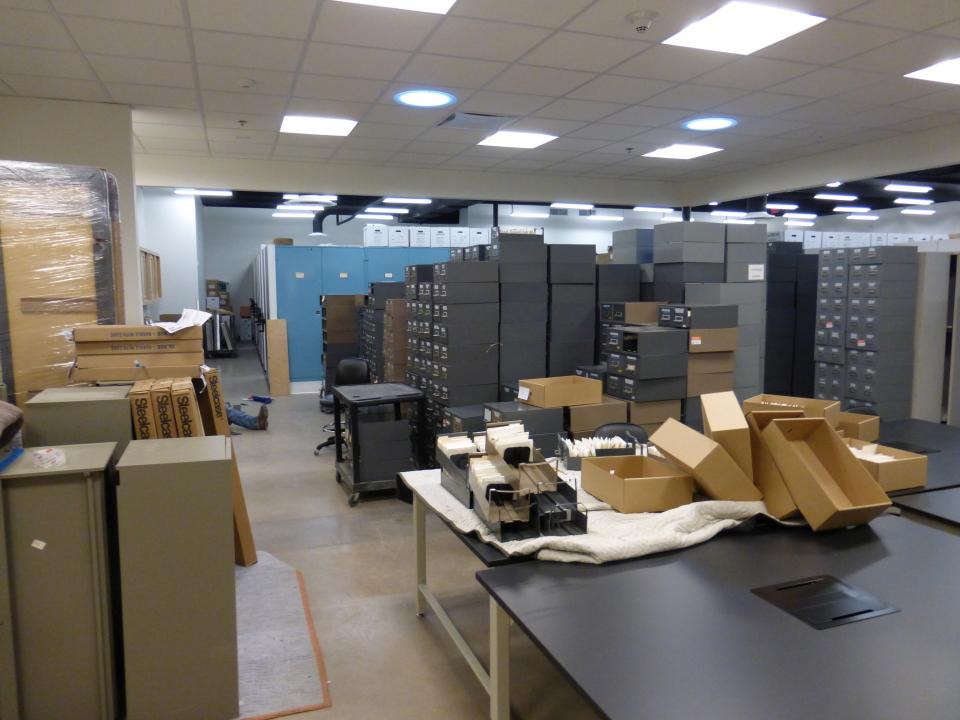 Samples of lichens can be preserved for centuries if kept cool, dark, and dry.  Lichen specimens are stored in paper envelopes that include a label indicating the name of the species, where and when it was collected, and the collector(s) who found it. Typically lichen specimens are sorted alphabetically by genus and species rather than by family since the taxonomic relationships of lichens are still poorly understood.

The Arizona State University Lichen Herbarium contains over 115,000 specimens and is one of the ten largest lichen collections in the United States.  The primary focus of the herbarium is on lichens of Arizona and the Sonoran Desert in northern Mexico, but the collection includes specimens from across the United States, Canada, South America, Europe, Asia, Africa, Australia, and Antarctica.  The lichen herbarium is open to the public and specimens are available for loan to researchers.  All of the label data from ASU specimens are available in a searchable database on the Consortium of North American Lichen Herbaria website.

History of the Collection

The ASU lichen herbarium was founded by Dr. Thomas H. Nash III in the early 1970s.  Prior to Nash’s arrival, there were fewer than 100 lichen specimens housed with the ASU vascular plant herbarium (mostly unidentified odds and ends from Arizona).  Nash came to ASU from Rutgers University, where he had just completed his PhD studying the effects of zinc pollution on lichens under legendary ecologist Murray Buell.  At ASU, Nash continued his research interests on air pollution impacts, but also studied lichen community ecology, ecophysiology, taxonomy, and floristics.  In four decades at ASU, Nash personally collected nearly 40,000 lichen specimens for the herbarium, focusing on the southwestern US and northern Mexico, but also including Alaska, Venezuela, Brazil, Argentina, Chile, South Africa, Saudi Arabia, Ukraine, Spain, Germany, Sweden, and Australia.  Nash mentored a generation of lichenologists at ASU, including Bruce Ryan, Janet Marsh, Frank Bungartz, Scott Bates, Ken Sweat, William Davis, James Lendemeer, and Lorene Sigal who contributed at least 30,000 specimens of their own to the collection.  Through an active exchange program with other herbaria (and members of the American Bryological and Lichenological Society), Nash was able to acquire nearly 50,000 additional specimens for the ASU Lichen herbarium, making it one of the largest in the United States. 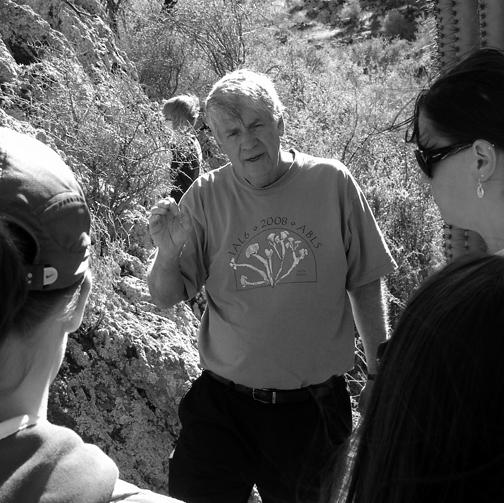 Tom Nash teaching ASU students in the field, circa 2009

Several important collections are found within the ASU lichen herbarium.  The ASU type collection includes 437 holotypes, lectotypes, and isotypes, mostly of lichen species from the southwestern US, Mexico, and South America. These specimens are of critical importance to taxonomists working on monographic studies of lichens.  Tom Nash created a special exsiccati collection (Lichenes Exsiccati- ASU) with 400 specimens primarily from Mexico, Arizona, Alaska, and other western states.  Through exchanges, ASU has at least 30 other exsiccate sets from around the world, including some historically significant collections from pre-industrial California (H.E. Hasse) and Switzerland (Schaerer).  In 2002, the College of Santa Fe in New Mexico donated the lichen collections of Bro. Arsene Brouard, a priest in the Christian Brotherhood order, who made important natural history collections in the southwest in the early 20th Century, including a number of lichen types that were thought to have been destroyed in World War II.

Beginning in the early 1990s, Tom Nash received funding from the National Science Foundation to document the lichen flora of the Sonoran Desert.  This resulted in more than a dozen collecting expeditions in northwestern Mexico and the discovery of over 175 new lichen species.  Nash, his wife Corinna Gries, Bruce Ryan, Frank Bungartz and over 90 lichen specialists from around the world, completed the three-volume Lichen Flora of the Greater Sonoran Desert Region in 2007.  This monumental work includes keys, descriptions, range maps, and specimen citations for nearly 2000 lichen taxa.

The ASU lichen collection is almost completely databased, with digital information available on the Consortium of North American Lichen Herbaria (CNALH) website.  The CNALH website was founded by Tom Nash, Corinna Gries, and Ed Gilbert to integrate digital specimen records between the ASU and Santa Barbara Botanical Garden herbaria using Symbiota database software.  The Consortium has grown to include 82 lichen herbaria across the United States, Canada, and Europe with combined holdings of nearly 2.3 million records.  Symbiota software is now used by hundreds of museum collections (including vascular plants, insects, and vertebrate databases) across North America and Mexico.

After Tom Nash retired in 2010 (see the journal Bibliotheca Lichenologica Vol 106, 2011 for a remarkable festschrift from his students and peers), the ASU lichen herbarium was put in storage for several years and was unavailable to students or researchers.  In 2013, ASU began renovation of the Alameda Natural History Collections museum off campus to house the university’s vascular plant, lichen, entomology, mollusk, and vertebrate collections.  This facility opened to the public in October, 2014.  The ASU lichen herbarium is once again open, and specimens available for study or loan.

Additional Resources:
Ten Things You Might Not Know About Lichens, But Wish You Did