The original aim of the ASU Justice, Equity, Diversity, and Inclusion (JEDI) Biocollections Scholars Program was to foster human-nature connections and provide hands-on biocollections experience for undergraduates from groups historically excluded from STEM fields. By these measures, the first year of the program was an immense success.

Four students from across different majors and undergraduate career stages at ASU comprised our first cohort of JEDI Biocollections Scholars. While they all entered the program with a... Read More

A unique, funded, and hands-on opportunity for students underrepresented in biodiversity science to participate in natural history collections research

In August 2018, Arizona State University's (ASU) Biocollections and Biodiversity Knowledge Integration Center were selected by the National Ecological Observatory Network (NEON) leadership to be the NEON Biorepository, potentially for the full 30-year duration of the project as presently designed.

Workshop: The Future of Systematics in Data-Centric Biology

This morning, I had a new paper published on the beautiful darkling beetles in the genus Eleodes Eschscholtz.  In it I described a new species I discovered from doing field work in Nevada during the summer of 2015.  When I tell them about my research, that I discover and describe new species of beetles, I am moreo ften than not greeted with surprise and the qustion "I thought we knew all the species on the planet, how do you find new ones?" This blog post is my attempt to explain the process by telling the story of Eleodes inornatus Johnston, 2016.

Join us for a Day of Discovery! September 10th 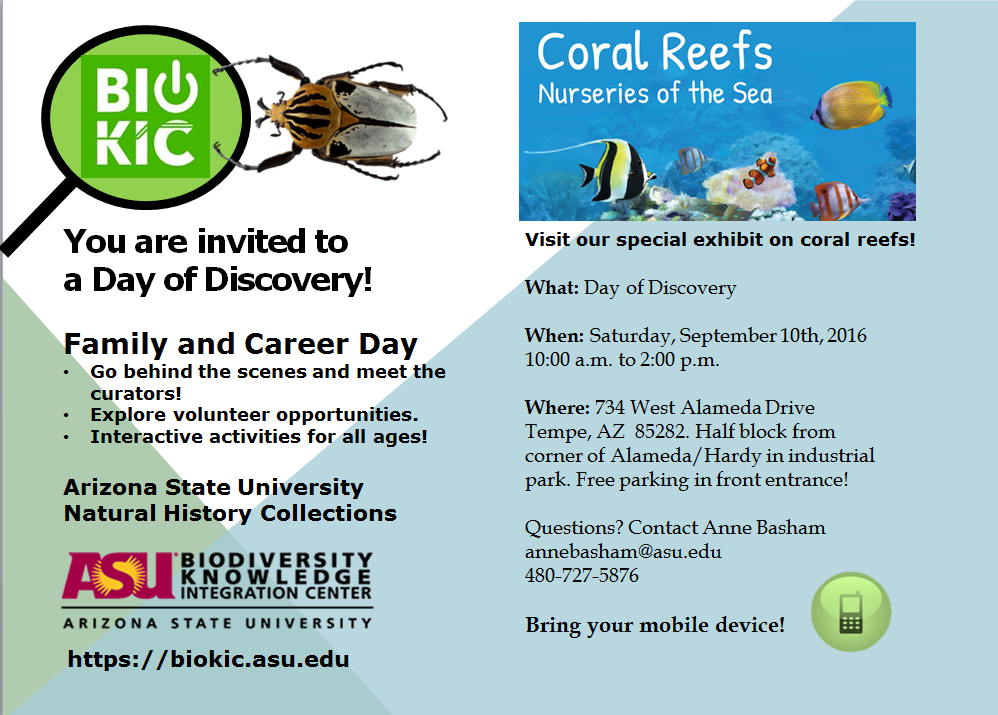 The oldest herbaria date to the Middle Ages when European physicians first learned that dried and pressed plants could retain their color and appearance for decades if properly preserved.  Initially specimens were bound in books to provide doctors with a handy reference for identifying the sources of herbal medicines.  Over time it became more convenient to keep specimens on loose sheets that could... Read More

We are announcing a new course, offered during Session B of the 2016 Summer:

Species, Traits, and Trees - A Hands-On Introduction to Phylogenetic Systematics.

Click on the flyer (image) below for additional information. Enrollment is possible now.

Posted by mwilsons on April 25, 2016 - 12:06pm in Informatics
We have two workshops sponsored by BioKIC coming up. Please register if you plan on attending so we can plan accordingly for food and for future workshops.
.
Deadline for registration is midnight Wednesday May 4th.
.
CoGe workshop: http://goo.gl/forms/lhqnB13HAJ
Wednesday May 11
9:00am-5:00pm
ASU Natural History Collections
734 W. Alameda Drive, Tempe AZ 85282
****Registration is limited... Read More
Tags:
comparative genomics, bioinformatics, coding 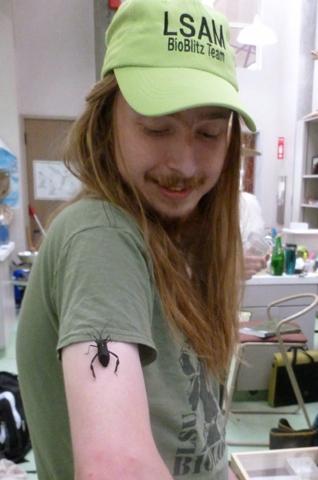